Captains & Commands
With the introduction of the new captains, we also improved the way you can give orders to your ships. Whenever you order your captains to carry out a command, you will need to select an area for them to work in. They will analyze that area and they will predict how successful they will be. This depends on several factors such as the individual abilities of the captain, the likelihood of the ship being attacked in that area, and whether the area is suitable for the specific command in general.

To see the pictures in full resolution, right-click on them and select "Open Image in new tab"! 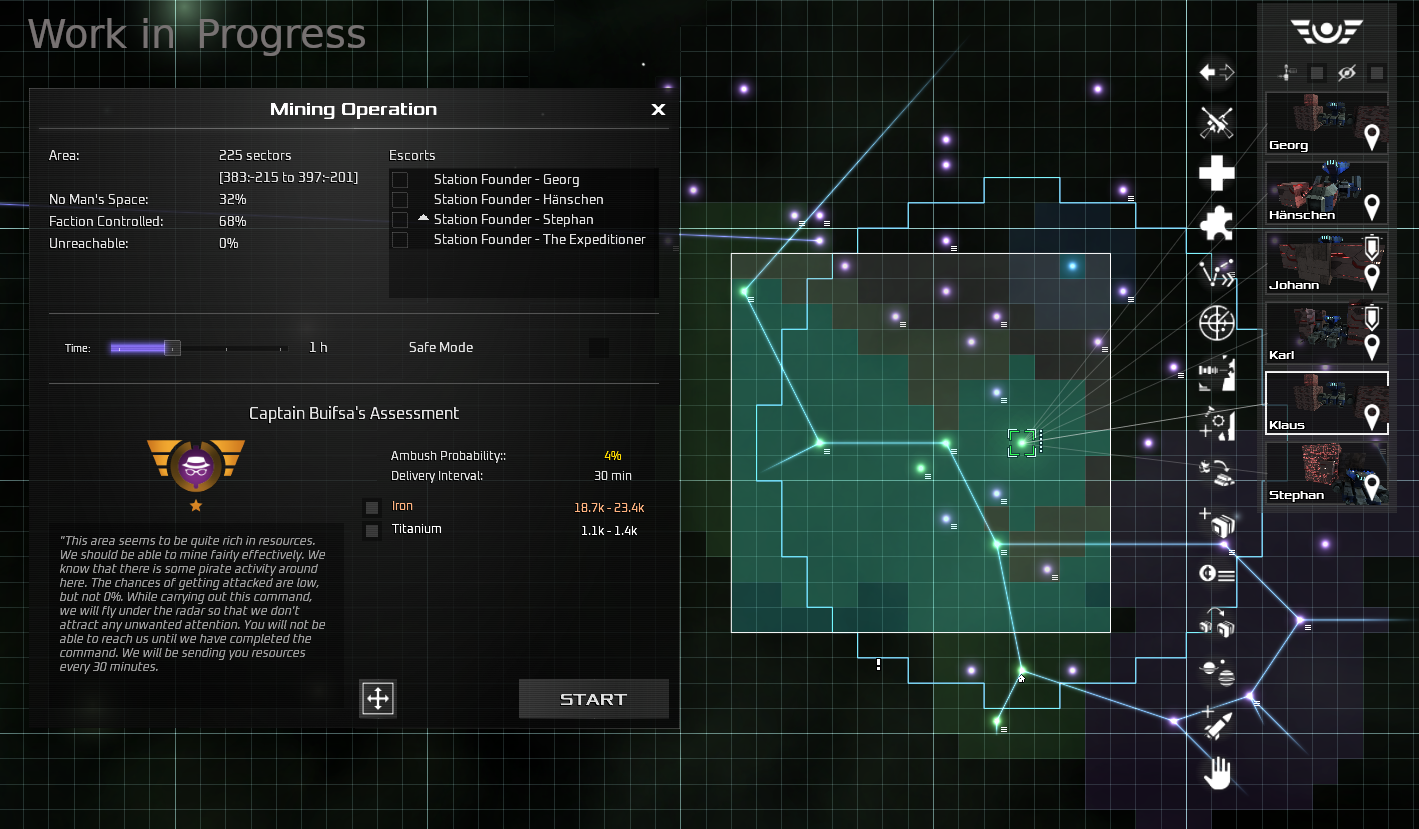 More Work for your Captains - Less for You
You will only need to give one order to get a captain to carry out a complex task, for example when you command a ship to travel from one side of the galaxy to the other. Depending on the equipment of the ship, you can order your captains to go mining or salvaging, and you can tell them how long they should be gone for and which materials to return with. If the ships have ores on board, the captains can take them to a refinery for you, and if they have torpedo storage, they can go and acquire torpedoes.
Are you simply curious about what might happen to your captains if you just send them out into the great unknown? You can give them the order to scout in a new region or send them on an expedition and they will tell you about their adventures and share their loot with you when they get back.
Those of you that are ready to build up a trading empire can use their captains to procure certain goods or to sell some of the wares they already have on board. And if you already have a bunch of stations, your captains will be able to supply them with goods that the factories require to produce. 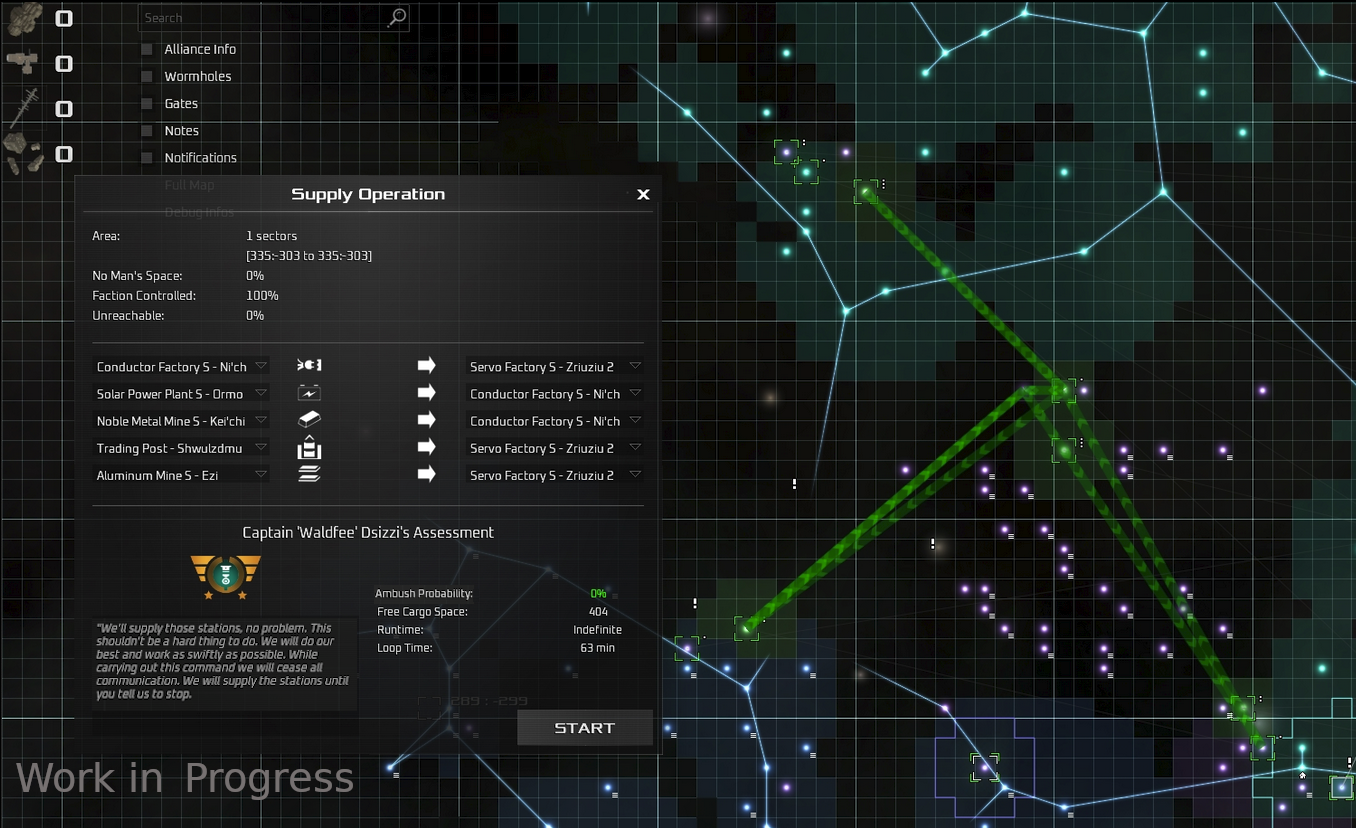 Escorts and More
We know that there are some quite dangerous regions in the galaxy, and your captains don’t need to brave all difficulties on their own. You can have your ships escort each other, making it less likely to get attacked while carrying out a command. And then you will be on your way to having the most effective fleet in the galaxy!
20/04/2021 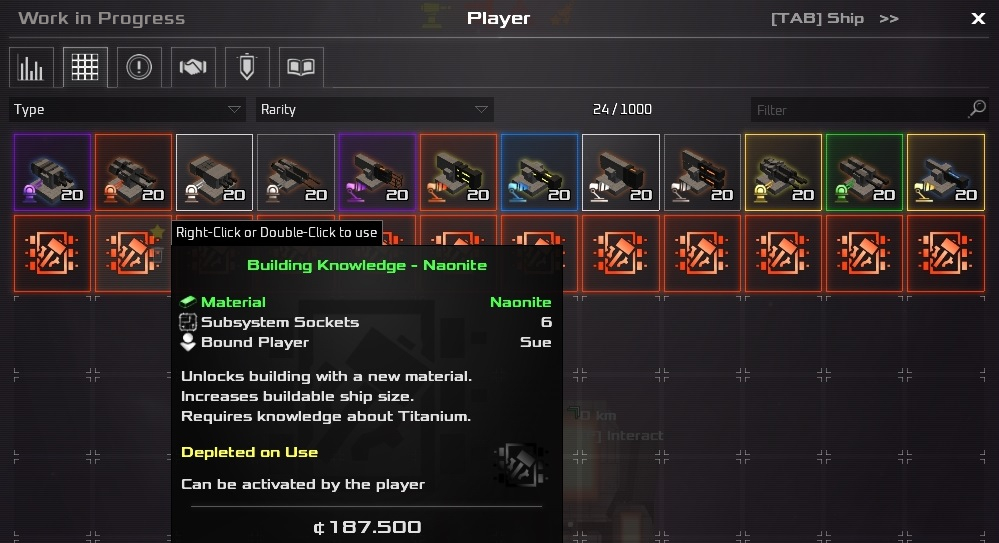 Building Knowledge
Today we’ll give you some info on the new progression system! We want the journey towards the center of the galaxy to be more challenging. From now on, you’ll have to unlock Building Knowledge about each new material (starting with Naonite, you’ll start out with knowledge about Iron and Titanium) before you’ll be able to use it for ship building. Unlocking the next material will also unlock the ability to build bigger ships with higher subsystem socket numbers.

There will be different ways to get your hands on above Building Knowledge. In any case, we want players to prove themselves in a new area before they can unlock the next building tier. You can get the knowledge for the next material by either beating a boss in the area or a difficult pirate encounter. In case you’re not the fighting type you can also buy the building knowledge at a shipyard from an allied faction in the specific region. 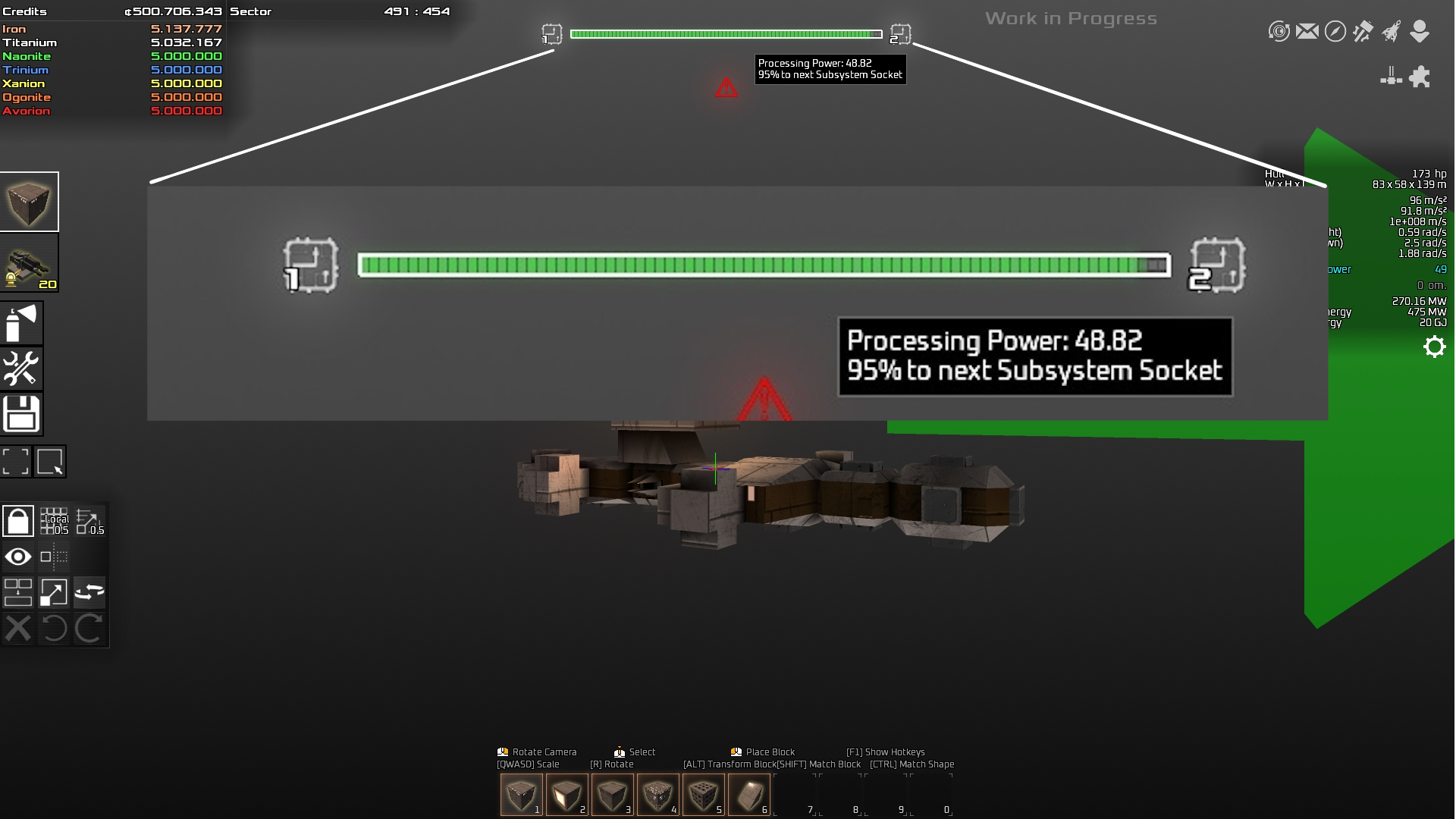 Processing Power Revisited
Building Knowledge will not only allow you to use the materials, but the higher-material knowledge you acquire, the more functional blocks you will be able to add to your ships. Adding functional blocks will not only increase the processing power but also the number of subsystem sockets of your crafts. This has always been part of the game, but now we’re visualizing it better. While taking a hard look at the processing power requirements for subsystem sockets we realized that some number tweaking might be necessary, so from now on you’ll unlock new upgrade sockets earlier (less processing power required)!

Existing Saves & Avorion Classic Scenario
Finally, the new progression will only be active for newly created galaxies. All your old savegames will remain the way they are. In case you’re not a fan of the new progression and prefer the more sandboxy approach, we are also going to introduce a new “Classic Avorion” scenario which allows you to play without the new progression. Whenever you create a new galaxy you will be able to select the option in the main menu.
13/04/2021

Captain’s Classes
We noticed that hiring captains used to be a bland affair that was necessary but rather boring. This did not go in accordance with our vision of the game. The new captains will have up to two classes, for example “Merchant”, or “Scavenger”, with their own individual capabilities. Captains will gain experience when completing commands, and leveling up will make them even more effective. 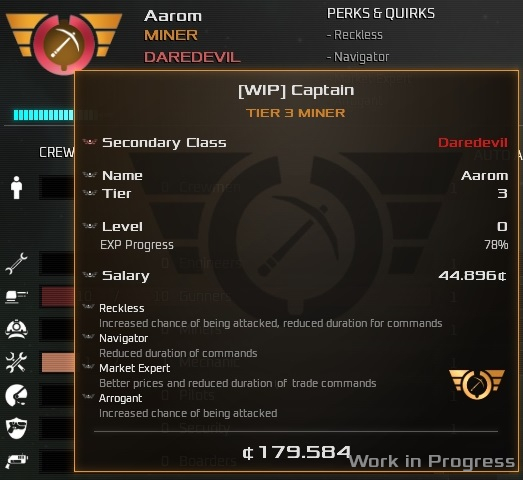 Captain’s Perks and Quirks
To show that each captain has their own personality, we also added character traits that make each captain special. These traits influence how well a captain is able to perform a certain task, so always make sure to put the right person on a certain job! Which captains you will be able to hire depends on at which stations you look for them and how much you are willing to pay. But don’t worry: none of the new captains will be able to do less than the old captains, but many of them will be capable of doing so much more! 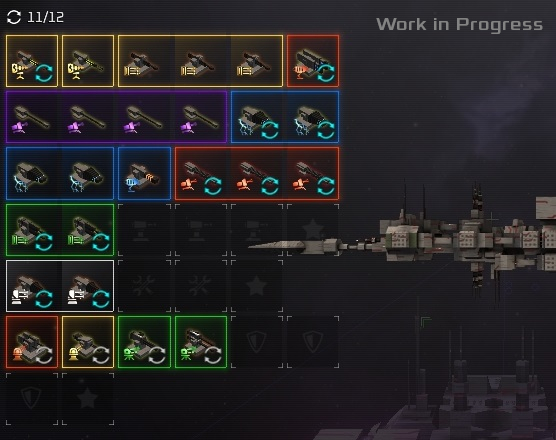 Changes and Improvements
We (and you, we know) aren’t completely happy with the way independent targeting is handled at the moment, so we went ahead and implemented some direly needed changes. Let’s start off with the most important change: turrets set to auto targeting will no longer deal -50% damage! The 2.0 Update will allow you to set a certain number of turrets to independent targeting, based on a slot system. We also made it easier to keep an eye on the turret slots you have available, showing which turrets need multiple slots and what kinds of slots are still unoccupied.

PDC Turret Slots
PDCs no longer use up military slots but are put into their own PDC slots, called “Defensive” slots. There will be specific subsystems that increase the number of PDCs you can install, but most other turret control systems will also add defensive slots. All PDCs will automatically have independent targeting enabled, so you won’t have to trade any slots or other firepower for defensive weapons.

Stay tuned for another Update 2.0 news flash next week! 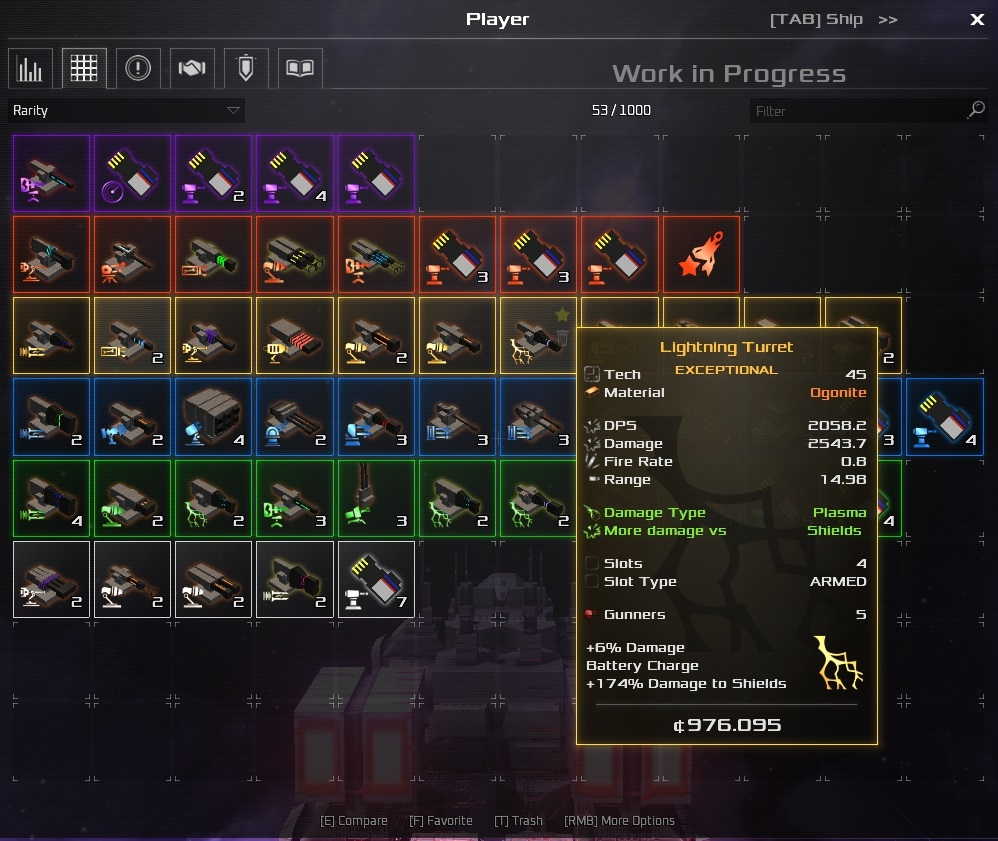 Inventory and Tooltips
We also added more colors to the inventory. Now it is much easier to keep track of your items of different rarities and everything has a more concise look. The window itself got a sleeker, more metallic style and the tooltips received a new paint job.

New HUD
Avorion’s GUI received some direly needed sprucing up and we’re very happy with the results. We freshened up the HUD, pulling the bars apart and adding icons to the individual bars for more clarity. 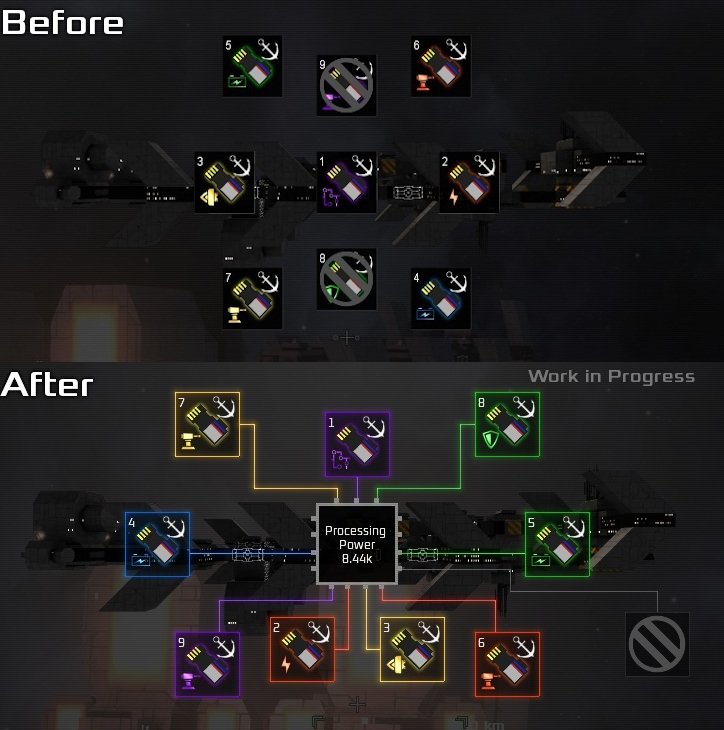 New Subsystems Tab
The old design simply did not have the high-tech look you would expect from a space game. But the new tab is not only more pleasing to the eye, it also explains much better how the volume of the ship limits the processing power and therefore the number of subsystem slots.

Further Changes
We know that our old GUI was difficult to read for people who are color blind. The 2.0 Update will introduce an option to change the color palettes of Avorion, allowing players to choose between different colorblind modes.

Over the next few weeks we will be posting more Update 2.0 news flashes, so stay tuned!

It's crazy how time flies! It’s been a whole year already since Avorion left Early Access!

We are super happy with how things have been going! That’s why we have a little surprise for you:

Update 2.0 will introduce massive changes that will fundamentally improve many aspects of the game:

Update 2.0 will improve game mechanics that might not feel perfect at the moment. Many of these changes will make Avorion feel like a new game, that is why the title of the update will be “Avorion Update 2.0”.

More details about the specific changes will be coming over the next few weeks. Stay tuned!
11/02/2021

We are hoping that you had relaxing holidays and an amazing start into the new year and that you are ready for the great news we’d like to share with you!

So without further ado, here it is:

At the moment we are working on a large (free ;) ) update for Avorion that will introduce many new features and massively rework some aspects of the game in Q2 2021. We don’t want to spill too much info at this point, but we would like to share some details to get you hyped up a bit!

There will also be changes concerning the game progression and the collection of materials. We know this sounds exciting, but you'll have to be patient for a little longer before you can discover your journey to the center all over again.

Now that we have dropped some spoilers, we would like to tell you that we have thought long and hard about what we want Avorion to be like in the future and which direction we want to go to improve it!

We have been taking a closer look at the gameplay and we have realized that you guys are forced to spend a lot of time on (annoying) micro-management. This is one of the things that we want to change in the future.

As you know, there are countless adventures and experiences to be enjoyed in Avorion. But we have noticed that we introduced a few features in the past that only scratched the surface and that have caused the game to feel a little rough in some respects. But now it’s finally time to smooth those edges! This means that we might have to tackle some (annoying) gameplay mechanics and reduce their scope. We are even planning on replacing some (micro-management intensive) mechanics with more intuitive systems. Our goal is to make sure that in the future, we won’t be spreading our efforts too thin and that we will be able to make our vision of the game bloom!

We are looking forward to the update and we can’t wait to receive your feedback! In the meantime, take a look at one of our verified servers, marked with a blue checkmark in the server list. Who knows, maybe you’ll find new allies there!

And if you still haven’t read enough, check out this wormhole that leads directly to our roadmap:

Beta Branch Note: These changes are currently available on the beta branch. The beta branch is for testing experimental changes and for finding and fixing errors.

This is how you get access to the beta branch (USE AT YOUR OWN RISK):
Right-Click on Avorion in your Steam list, Properties -> Betas -> Select branch 'Beta Branch - Newest Changes & Experimental Features'.

Beta Branch Note: These changes are currently available on the beta branch. The beta branch is for testing experimental changes and for finding and fixing errors.

This is how you get access to the beta branch (USE AT YOUR OWN RISK):
Right-Click on Avorion in your Steam list, Properties -> Betas -> Select branch 'Beta Branch - Newest Changes & Experimental Features'.

Gameplay
Client
Misc
Bugfixes
"As always, bugs marked with [UBR] are User Bug Reports, submitted through our in-game bug tracker. Thanks very much for helping and keep 'em coming!"